Wine Story - Getting past Gothic confusion 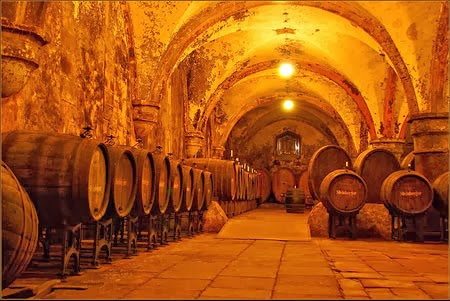 The list wine I ever tasted was German but I have not told many people about it, The wine was a Blue Nun Liebfraumilch - a style of semi-sweet white that is thought to appeal to neophytes, Indeed, Liebfraumilch means "Beloved lady's milk", Who would want to admit to drinking such, except beginners?

As a brand, Blue Nun was conceived in the early 1920s and by the 1960s and 1970s, it had became one of the largest international wine brands in the world, but it never shook off its "good-for-beginners" reputation among snobbish connoisseurs, The other day, while enjoying a host of lightly sweet, or Spatlese style, German wines, I confronted Blue Nun again, and nostalgia swept over me as its taste took me back in time.

To be fair, Blue Nun remains a well-made wine and I have no qualms about serving it up. Tasting it again recently, it dawned on me why the brand became so successful, and why many neophytes like myself at the time drank so much of it: it was easy to understand compared to other German wines, Blue Nun's label was designed as a consumer-friendly alternative to those of lots of German wines that use mostly Gothic script and have long, complicated names.

Consider the typical German wine label. If you can get past reading the Gothic letters, the label reads like a booklet. You will find information on the grape variety, the name of the estate, the producer's name, the village name, the vineyard name, and the ripeness level of the wine,
Not only that, there will be unfamiliar and seemingly important terms such as Erzeugembffillung, Gutsabfullung, or Abfuller, But these aren't scary when you know what they mean: Erzeugerabftillung simply means wine bottled and produced by a grower or a cooperative of growers; Gutsabfullung is an alternative term: while Abfuller means wines that are bottled by those other than growers.


With a little history and geography, of course.
Germany began cultivating grapes when the ancient Romans (circa IOOBCE) introduced the vinous delights to the country that they occupied. Later, during the Middle Ages, as it developed in France, it was the monastic orders that established the country's finest vineyards.

Not long after, the Church's vineyards were divided up and sold to private owners, and, by 1803, when Napoleon Bonaparte
occupied the Rhine region, the fame of the wines was so well established that the French emperor even chose German wines over French when he dined.

Because of the temperate climate, and their location in the northern hemisphere, Germany's vineyards are located on south-
facing slopes, in valleys, and almost always close to a river (which is a moderating influence on temperature). All of this helps maintain a constant temperature day and night.

Moreover, during autumn, fog that rises from the river offers the grapes protection from frost. Ridges of hills and forested summers also help to protect against winds or to deflect them. You can thus appreciate that each vineyard enjoys microdimates that are slightly different.

Today, there are 13 wine regions in Germany, all lying along the banks of Germany's many rivers. The most famous regions are Nahe, Pfalz, Rheinhessen, Rheingau, and MoseI-Saar-Ruwer.

These are some of the varietals:
Riesling - the most famous, with a fragrant citrus and peach fruit bouquet and pronounced acidity, which endows the wine with ageing ability.

Muller-Thurgau - an everyday wine, best consumed young, and with an attractive flowery bouquet and milder acidity than Riesling.
Silvaner - another daily wine with a neutral bouquet, mild acidity, and full-body.

Email ThisBlogThis!Share to TwitterShare to FacebookShare to Pinterest
Labels: Wine